Published by Meghana Joshi on December 16, 2014 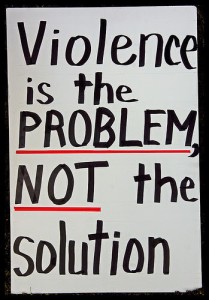 It’s too much of a disturbing coincidence. December 16, 2012 & December 16, 2014 – both among the darkest times for humanity in recent years! Two years ago, shocked and traumatised after the Nirbhaya incident, it seemed that mankind couldn’t descend any lower than this, that this must surely be the nadir of brutality. Sadly, humanity continues to plummet to unbelievable levels.

It’s impossible to escape the irony of it all – the callous manner in which the perpetrators justify these insane acts in the name of “God” – the very idea that stands for love, peace and goodness. It must take a sick mind to take a life and a twisted, cowardly, monster of a mind to murder innocent and defenceless children while they are at school,  in the process of imbibing lessons that will equip them to build a future.

The lucky ones who escaped the chilling attack will be the ones scarred forever, embittered by this cruel twist of fate. The first images pouring in of the tragedy showed a young boy expressing his outrage by vowing to take revenge and destroy those who destroyed his friends. While such a reaction is understandable in his present situation, it is scary too – as it fuels the feeling of vengeance and lets continue the eye for an eye attitude that has dragged humanity down to its lowest.

The unimaginable anguish of the parents who have lost their children to this gruesome tragedy is something that will stay with them forever – no condolences and support are going to be able to console them. Words too fall short of expressing the utter helplessness, devastation, disgust and pain that this incident has sparked in millions of hearts.

It is a shameful day for humankind. The only prayer that we can collectively make is to hope that no more minds allow themselves to get warped and twisted, that the human race sees reason and stops this madness before it is too late.